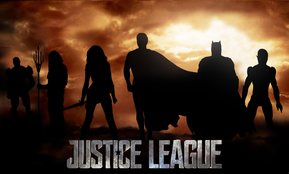 The latest in the DC universe, Justice League stars Ben Affleck as Batman and Gal Gadot as Wonder Woman, who gather together a group of superheroes including Aquaman (Jason Momoa), the Flash (Ezra Miller) and Cyborg (Ray Fisher) in order to save the world from yet another CGI villain whose name I can’t remember.

That’s not a criticism of the film, however, as plenty of the villains in the Marvel universe I have the same issue with: witty or brooding protagonists attempting to save the world from somewhat forgettable antagonists. This film was given terrible reviews, with a 41% rating from Rotten Tomatoes, earning only $2.1 million at the box office (which may seem like a lot but it is nothing compared to other superhero  films at the moment) and the Telegraph calling it a ‘debacle’. However, looking at several reviews, they all have one thing in common: they all reference the previous films in their affectionately named ‘murderverse’ on account of the high casualty rates of civilians in the films.

Now, while these films are part of a series, it seems unfair to group them all as being the same, especially given the difference atmosphere between Justice League which features frequent jokes and has a light tone and Man of Steel, which was bleak and had a much darker tone. Yet all the critics seem to think that they are all the same, so while most films from the Marvel universe get on average good reviews, every single one of DC’s attempts so far have been considered to be off the mark.

One possible reason for this could be that DC creating a dark superhero movie is expected, and given several of their past attempts having failed (Suicide squad and Batman Vs Superman to name a few), DC has now been stereotyped as creating lacklustre superhero films that are too dismal and depressing, leading for people to ignore those films that are more positive. Overall, I would say that Justice League is actually quite a good film, and while it won’t be winning Oscars any time soon, it’s a solid movie that is on par with Avengers Assemble and Captain America: The First Avenger by Marvel.

So no, I would argue that it certainly doesn’t deserve all the bad reviews, and yes, there are forgettable villains and over the top action scenes but that’s what you look for in a superhero film. If you can’t cope with that then you probably don’t like any superhero films, because that’s just something that is expected of the genre.

My only other complaint about the film is the questionable CGI effects used to erase Henry Caville’s moustache. It looked very weird and often made the actor unrecognisable. In the future it would probably be best not to continue with the CGI moustache or lack thereof.