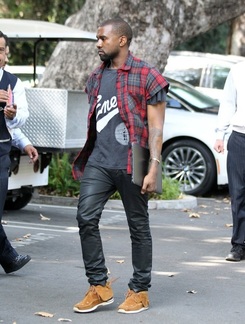 When you think of Kanye West, the first things that may spring to mind are either his music or his ego. However, what has seemed to slip under the radar from the scrutinising eye of the public is his recent venture into the wonderful world of fashion. The recent release of his Yeezy collaboration with Adidas hasn’t exactly grabbed the attention of the media or the world, but it has successfully revolutionised street fashion in itself and the community surrounding the culture.

Kanye himself has always been a polarising figure, from his thought provoking music to his hilariously controversial narcissistic tendencies, it cannot be discredited that Kanye has been shaking the Western world since his first album The College Dropout debuted in 2004. He’s had previous ventures into fashion before, such as his collaboration with Nike that produced the Air Yeezy, a highly sought after series of shoes that are now being resold for an astounding five thousand USD. Now, after an eventful end to the Nike collab, Kanye has signed on to produce with Adidas, becoming the most high-profile name the German label has signed so far.

Kanye has produced three different shoes and one season of clothes with Adidas, all of which sold out within seconds of it becoming available. The most desired item being the Yeezy Boost 350, which has spawned a huge resale market in its wake and caused the birth of thousands of cheap replicas and knock-offs. This sort of response to a release of a shoe is only typical of Nike shoes. For Adidas to finally have the same stopping power as its competitor and to have a staple piece in the resale market is absolutely phenomenal, with the Yeezy Boost 350 being resold for approximately 720% of its retail value. All of this would not have been achievable without the stopping power of Kanye West’s name.

Perhaps what you’ve just read has completely flown over your head and you’re just in sheer amazement that anyone would pay five grand for a pair of trainers, but the point I’m trying to make is that having a celebrity endorsement can make your product sell out in seconds. Of course, you can’t have your D-List TOWIE star endorse your brand and expect to have your stock completely wiped, but the Kanye/Adidas project just goes to show how both Kanye’s perception in the world of fashion and the sheer influence behind his name.