Knife Crime: an issue that needs to be addressed
By Harry Shone and Molly Dew 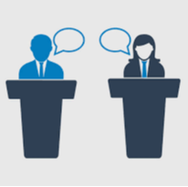 Total knife offences in England and Wales - Offences involving a knife or sharp instrument
​Knife crime is a growing epidemic in the UK, so much so that people have become desensitised to the topic. Previously, seeing a report of a knife attack in the news provoked an outrage across the nation, whereas now, even though there is still shock around the community, people are hearing of these attacks almost on a daily basis (39,818 knife crime offences were reported in 2018), and people are becoming a lot more used to them. This begs the question of why knife crime is so common in British society today.

Whilst researching the matter, we came across a pertinent interview on Good Morning Britain between Piers Morgan and author/rapper Akala. During the interview Piers referred to knife crime as an issue amongst “young black teenage boys”, Akala immediately interrupted this point and placed importance on how irrelevant ethnicity is to this subject saying: "Listen to what you just said, when you think blackness is the most important thing to emphasise about these young men, almost half of the young people in prison in Britain, regardless of ethnicity, were in care as children." Akala then went on to state social indicators that could point towards the influx of knife crime such as “relative poverty, toxic masculinity, exposure to domestic violence and lack of education” as possible reasons, although he made a point to say that another major contributing factor is the individual themselves. This interview helps shine light on the common misconceptions of knife crime and gives an insight into what can be done to aid reducing  the reoccurring issue.

Unfortunately, knife crime is commonplace around the country. Although London is where the most dangerous knife crime instances occur, there are also particular issues in Gloucester. An article from ITV revealed how people truly feel when they live in a world of constant fear of knife attacks and uncertainty of survival. If I'm one of these young people who doesn't have any goals in life and doesn't care about tomorrow, why would I care about doing certain things like carrying a knife or anything? There's no goal, there's no future for me anyway.”  Surely these issues need to be recognised, and change needs to ensue.

So why is knife crime so common in society today? Is it because of poverty? Is it a class issue? Or is it the lack of education for young people on how to deal with social pressures in an ever-changing world? These are issues which can be solved, but only with help and cooperation within the community, and also input from the government. Hopefully, the streets can become a safer place for all, and knife crime can be a concern of the past.