A Guide to the Labour Leadership Contest
by Roisin Canny 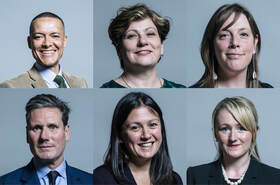 Following Labour’s disastrous election result in the most recent general election, Jeremy Corbyn announced that he would be stepping down as Labour leader following a “period of reflection”. This has triggered a leadership contest within the party. Here’s everything you need to know:
Who are the candidates?
Although six candidates initially entered the race, only three of them will appear on the ballot paper.
The six candidates who entered the race were Clive Lewis, Keir Starmer, Rebecca Long-Bailey, Jess Phillips, Lisa Nandy and Emily Thornberry. Clive Lewis was eliminated as he failed to secure the backing of enough MPs. Jess Phillips quit the leadership race on 21st January, saying that she wasn’t the right person to unite the party.  Emily Thornberry did not secure enough nominations from the constituency Labour parties or affiliates in the second round of voting.
​
Here is a quick guide to the remaining candidates:
Keir Starmer –  he is seen as a front-runner. He was a prominent campaigner for Remain and a key voice in calling for Labour’s second referendum policy. He is pitching himself as a “soft left” candidate, meaning that he is more moderate than Corbyn. Keir Starmer has secured the backing of Unison, the UK’s biggest trade union, as well as Sera (an environmental affiliate group) and Usdaw.
Rebecca Long-Bailey – she is seen as the “continuity Corbyn” candidate, meaning that her election as leader would not signify a significant departure from Labour’s current direction and many of the policies would remain the same. However, she is keen to rid herself of this image.  Rebecca Long-Bailey secured the required backing of Momentum, Unite and ASLEF (Britain’s union for train drivers).
Lisa Nandy- she is the MP for Wigan. In her pitch, she is focusing on rebuilding Labour support among small towns and communities where Labour lost in the last election. Lisa Nandy has secured the backing of National Union of Mineworkers and the GMB union, as well as the Chinese for Labour affiliate group.
​
What’s next?
Labour members and registered supporters are currently voting to elect the new Labour party leader, with the result being announced on the 4th April.