Weaponised Lasers: doomed to stay confined to the realm of sci-fi, or poised to become tangible?
Arona Jones 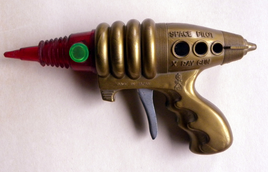 Laser-based weaponry has been a staple of sci-fi since the invention of the conventional laser in 1960, despite the real-world laser’s current limits as a weapon. From the ubiquitous death rays of evil geniuses everywhere to the various phasers and laser guns of many universes, from Star Wars to Transformers and from Star Trek to Doctor Who. Although it's not widely known, laser weaponry is already in use outside of the film industry.

Lasers already have widespread military use for range finding and targeting in conventional weaponry. There are also non-lethal lasers in use, such as dazzlers which are intended to temporarily blind people or sensors. However, the weaponisation of lasers is not too far away - laser and other DE weaponry has been in the research stage for decades now in the USA and Europe. A test ship called the USS Ponce, has carried a laser weapon creatively known as the LaWS - Laser Weapon System - since 2014 for field testing. There’s quite a way to go until these weapons are ready for full scale deployment though.

The military term for weapons like lasers is DEW, or directed-energy weapon. This doesn’t just cover lasers, but also includes directed sound, particle-beam weaponry (perhaps to be explained in another article), other electromagnetic waves like microwaves and masers, which were a forerunner to lasers. The US Department of Defense (DoD) defines directed-energy as “an umbrella term covering technologies that produce a beam of concentrated EM energy or atomic or subatomic particles.”

DE weaponry generally all has the same intention and overall effect - to heat a part of the target and thereby damage it. Laser weapons usually deliver this energy in brief-high intensity pulses. A one megajoule (about the same energy as a one-tonne truck moving at 160km/h!) laser pulse delivers a similar amount of energy to 200 grams of TNT, and has essentially the same effect on the target. Not all lasers use electricity to generate the required energy - some use the energy of a suitable chemical reaction, such as the reaction between deuterium (an isotope of hydrogen) and fluoride.

DE weaponry would have several advantages over conventional arms, such as:
Almost total lack of recoil and sound
The infinite (given enough power) ammunition
Practically instantaneous impact of the shot (removing the need to account for a target’s movement)
Removal of the need to compensate for the effect of gravity on the projectile.
Minimisation of collateral damage.

Several prototypes, such as the Boeing YAL-1 aircraft have been created. The YAL-1 is the ‘Airborne Laser Testbed’ and was first test fired in 2007 using a low powered laser, and intercepted its first targets using a higher-power laser in 2010. Despite this early success, funding was cut that same year, and the project officially cancelled in 2011. This was because, while the project was a technical success, the range was too short, and the cost too great, for the military to consider it an “operationally viable” weapon.

Additionally, a microwave-based non-lethal weapon known as Active Denial is in use by the major American defense contractor Raytheon, and the US Air Force Research Laboratory, for the purpose of riot control. It works by heating the water inside the target’s skin, which (unsurprisingly) causes incapacitating pain, similar to the way a microwave oven heats food. There are concerns about the long term effects of the use of this weapon, and if it could cause permanent damage to eyes. The system can also be used to destroy unshielded electronics. It is available in various forms, including one mounted on a Humvee, as pictured. Additionally, there is a airport defense system called Vigilante Eagle which uses a microwave array to scramble the targeting systems of missiles fired at aircraft, deflecting them away. Another existing weapon is called the electrolaser. This is effectively a large, long ranged taser. It works by allowing a laser to bloom - in which the laser begins to defocus as it rapidly heats and ionises the surrounding air into plasma - and then firing a powerful electrical pulse along the ionised trail of plasma the laser leaves, which is conductive to electricity.

There are still many limitations on the use of laser weaponry. Current methods for storing and transforming electricity are not efficient nor small enough to produce a usable handheld laser weapon. Existing laser weapon systems waste a huge amount of energy as heat, meaning they need bulky cooling systems. These problems become less severe if the laser is mounted in a static defense turret, rather than on a vehicle, as the size becomes much less of a problem. Chemical lasers present further problems with storing the fuel, and the issues with cooling remain.

The aforementioned blooming is a problem for most lasers, as it causes significant energy dispersal, which is made more severe if the air is foggy or dusty. Fog, rain, dust and other similar environmental conditions can also scatter or completely deflect the laser, a problem which bullets do not suffer from. Furthermore, material evaporating from the target as it becomes damaged can also ‘shade’ the laser, and block some of the energy. While not a problem with laser weaponry per say, DE weapons are also not capable of indirect fire, as a conventional mortar or other artillery piece is. A possible solution to this is spaceborne lasers or reflectors - although it is currently difficult and expensive enough to get laser weapons airborne, let alone into orbit! Despite these limits, I believe laser and other DE weapons will become mainstream during our lifetimes.