Clothes for refugees: Coming together to make a difference
Joanna Lambert 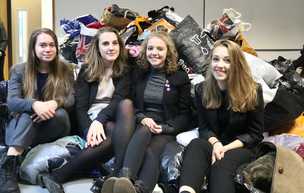 On Saturday 26th November, Mr Chapman and Mr Christophy drove a van, kindly donated by a Hertford company called Pickle and Slice, full of hats, gloves, scarves, jumpers and warm clothes and shoes, all of which had been generously donated by students and their families at school – thank you all so much for your amazing generosity!

We first came up with the idea for clothes collection after speaking with Mr Christophy about what our next charity venture might be and how best we could respond to the huge refugee crisis.

As per usual at this time of year, we were all getting into the Christmas spirit far too early. This festive warmth and ‘goodwill to all men’ helped us to grow the idea of donating clothes to refugees in need. Over the Christmas holidays we realised that people would be receiving new clothes as gifts, and so by encouraging people to donate their old clothes we would be helping the refugee crisis, whilst clearing much-needed space in people’s wardrobes.

So our style team designed some posters and we set about spreading the word through notices in registers, the weekly bulletin and an assembly led by Merla Speak and Faye Lyons.

The response was incredible; overall we received over sixty bags of clothes and soon had to move our collection point from the classroom E06 to the M block in order to cope with the volume of donations. Items ranged from coats to baby clothes. The donations were so extensive that we were struggling to sort and pack up the collection, so the Interact Team stepped in to help and the Year 13s even interrupted their Sixth Form entertainment rehearsals to help as well. A huge thank you goes to everyone that helped us to sort the clothes; we couldn’t have done it without your help!

The donations have now been safely delivered to the charity Together 100 in conjunction with Herts for Refugees. From there they will be sent to Northern Greece. We chose this charity after researching local charities, and they already had plans to ship out a donation to Greece over the Christmas period, so we were able to be a part of this.

Having seen and heard about the worsening refugee crisis across Europe it sometimes feels as if anything we do individually will be insignificant. But surely we can’t fail to be moved by the images we have seen on our TVs? The charities we have donated to have experience of how best to respond to the frequently changing needs of the refugees, so working with them and being guided by them in our endeavours, we believe our small effort will make a difference.

A massive shout out to everyone that donated and helped; it’s incredible how we managed to all come together for this cause in such a small amount of time. On behalf of the style team and Together 100 thank you!