​I am sure many of you who love fashion and especially those of you who enjoy fawning over red carpet fashion looks will be aware of The Met Gala; but what is it and when does it normally happen? Well before I introduce you to my (personal) favourite looks from the Met Gala this year let me give you a little explanation about this extravagant celeb-filled event!
The night is most commonly known as the latter, however, the event is formally known as the Costume Institute Gala. The gala is a fundraiser dedicated to New York City’s Metropolitan Museum of Art’s Costume Institute- formally named The Anna Wintour Costume Centre, in homage to the American Vogue’s editor-in-chief, who has been a chair member of the museum’s gala since 1995.
The benefit founded in 1948 by publicist Eleanor Lambert was to encourage donations from New York’s high society.
The Met Gala usually happens every first Monday of May.

Why Does It Have A Theme?
​

​The Met gala also marks the opening night of the Costume Institute’s annual fashion exhibit. The theme of the exhibition sets the tone for the event and the celebrities that are invited must therefore dress accordingly.

So there you have it, a quick rundown all about this spectacular event now let’s get into this year’s theme and my top 5 favourite looks…

The theme of this year’s Met Gala was: ‘Gilded Glamour and White Tie’. It was tied to the second part of curator Andrew Bolton's two-part exhibition, “In America: An Anthology of Fashion”, which explores the origins of American fashion.

​Firstly, the gorgeous Blake lively, who (in my opinion) nails every single Met Gala look. Have you noticed that her dress always matches the carpet on the stairs at the event as well, how creative! This year she caught everyone’s attention thanks to her incredible dress transformation on the red carpet. At first the star walked the iconic Met museum steps in a shimmering rose gold gown with an extravagant bow; which was inspired by Manhattan’s intricate architecture and paid homage to the Empire State Building. The bow on her skirt was then untied to reveal a cascading blue train, of which the design was inspired by the constellation décor at Grand Central Station. She also peeled off her rose gold gloves to reveal a matching blue pair underneath. Meanwhile, her seven-tier crown symbolised the Statue Of Liberty which has seven rays. "Instead of looking to fashion to influence the dress, I looked to New York City architecture and the classic buildings," Lively explained to People on the carpet.
Overall I think her look was stunning and breath-taking, don’t you? ​The Canadian Singer-songwriter Shawn Mendes returned to Met Gala red carpet on Monday 2nd May this year, capturing the Gilded Glamour theme with a classic early 1900s look. Mendes walked the red carpet in a Tommy Hilfiger red and navy coat with his initials embroidered on the inner lining. He later removed the coat to reveal sleek navy suit, which he completed with a matching turtleneck and nail polish. The best part was his entire outfit was upcycled and sustainable! ​This was Billie’s second time on the Met Gala red carpet, and she made sure her sequel look was just as much a standout as the first. She put her own spin on the Gilded Glamour theme and opted for a regal Gucci look by Alessandro Michele that was made entirely with upcycled materials. Eilish wore a custom Gucci ivory and duchesse satin corseted gown, complete with a green lace underlay and gathered ivory skirt- as well as a padded bustle. For Billie, it was important for her look to be sustainable this year. ‘I just wanted to be as eco-friendly as possible’, she said during the Vogue livestream. I find it very admirable that both her and Shawn Mendes opted for upcycled looks for this prestigious fashion event as it is better for the planet and will make them both good role models! ​American model and former Victoria’s Secret angel Taylor Marie Hill attended the 2022 Met Gala in a gorgeous blue dress. The blue satin off-the-shoulder gown had long sleeves, huge flowers around the bodice and an enormous train that descended down the famous Met Gala steps. However, the most beautiful aspect of her look were the large, colourful, embroidered flowers that covered the length of the train in a beautiful pattern. It really was a work of art!
Overall, I think she looked gorgeous as the dress was paired with a pair of over-the-knee stiletto boots in the same colour and fabric as the dress, very clever! Personally, I believe she nailed this year’s theme. 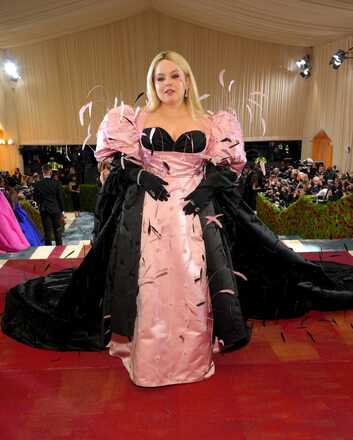 ​This was Bridgerton star Nicola Coughlan’s first ever Met Gala look and wow; she definitely made a statement! The actress chose to wear a custom jaw-dropping ensemble created by British designer Richard Quinn. The look consisted of an embroidered and feathered pink and black ball gown with matching cape and it takes inspiration from the fabrications of lavish 19th-century style with its silhouette, exposed cups and use of duchess satin. I believe her look was perfect for the theme of Gilded Glamour and she looked incredible on her Met Gala debut!

​Those were my personal top 5 looks from this Year’s Met Gala, I can’t wait to see who is invited next year and what amazing, beautiful looks they will be wearing!