The Rise of the #METOO Campaign
​Jordan Hinks 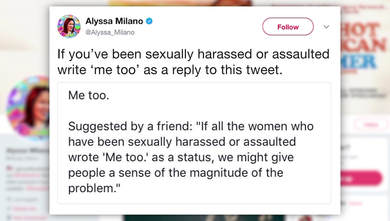 The viral birth of the #METOO campaign began in October 2017 to acknowledge the sheer amount of sexual assault and harassment primarily in the workplace that victimises all genders. The campaign has allowed people across the world to shed light on sexual harassment, a topic that is usually avoided or all together ignored by our modern media.

American activist, Tarana Burke, was the founder of the campaign, however it was American actor, activist, producer and former singer, Alyssa Milano who shed light to the movement. This occurred after Milano took to twitter on 15th October when a friend advised her to use the #METOO in her tweet. In reaction, nearly 68,000 people have replied to Milano’s tweet and more than a million people around the world have used the hashtag. Milano’s tweets were in response to the Harvey Weinstein sexual misconduct allegations. Weinstein was expelled from the Academy of Motion Picture Arts and Sciences for alleged sex crimes against women in the film industry. Milano shared her view on twitter as she believes it is a platform that gives people the “opportunity without having to go into detail about their stories if they did not want to". Harvey Weinstein was immediately sacked by the board of his company after the accusations came to light. The lawsuit against Weinstein alleges he sexually harassed and abused female employees for years, actors Rose McGowan and Ashley Judd both came forward to have been abused and harassed by Weinstein. This has not only been a trigger to many people in the Film Industry announcing their own stories involving figures such like Weinstein, but people are tweeting #METOO to show that they’ve be affected in any industry.

Gwyneth Paltrow, Ashley Judd, Jennifer Lawrence and Uma Thurman are actors that have responded to the campaign, sharing that they are victims of sexual assault or harassment. The social networking sites  Facebook said that within 24 hours, 4.7 million people around the world engaged in the #METOO conversation, with over 12 million posts, comments and reactions.

However there have been hostilities towards the campaign, for example academic and cultural commentator Germaine believes women will still face abuse despite the efforts of the #METOO movement. Germaine spoke out about the direction that the movement is going in; she states "I'm concerned for damage limitation, rather than maximisation.” Adding that "None of the things we're doing actually work to protect women from abuse."
The #METOO movement has also inspired a series of hashtags used by men across social media, for example #IDidThat and #HowIWillChange, in which men have admitted inappropriate and abusive behaviour. this is a massive step forward for all those who have experienced sexual harassment, as it has allowed them to find closure and know that there is work being done in support of them. This campaign has shown how useful social media is as a platform, in which people can bring serious issues to light and raise awareness for them.