Location: LONDON ROAD, HARLOW, CM17 9NG
Click here for the restaurant website
Overall Rating:★★★​★
​Miller and carter is an award-winning steakhouse restaurant chain and with 120 locations to visit there’s always an opportunity to dine-in, take away or get delivered a quality aged cut of steak.
​
As the restaurant was awarded “The Masters of Steak” accreditation from the Craft Guild of Chefs I approached this review with high expectations of the restaurant and what my evening meal would be like. My excitement was increased thanks to the positive reviews left by customers of their experiences with the steakhouse, praising it for the exquisite steaks and the passion and care taken into preparing them by the chefs. So, does the excellence and high standards of steak presented by the chain restaurant live up to the reviews? Well, I can say it does but there are some issues to point out.

The first issue for some, but not me, will affect those who chose to dine in at the restaurant. The restaurant has a dress code, “smart casual” this is quite vague. However, the restaurant is clear on how it prefers customers not to dress for the dining experience, specifically not wearing any sportswear e.g., hoodies, joggers etc. Of course, this was no problem for me as I am not one to wear this style of clothing, but others may find this annoying and possibly restrictive.

Upon entering the restaurant, you get a sense of an upmarket cosy atmosphere that can be lively on peak hours and days. You will hear the dings of bells as the steaks are served and the social chatter of many individuals eager to dig into their cuts of meat. The restaurant accepts reservations for tables but also can allow walk ins (but preferably reservations). On a busy day getting your reserved table can be a struggle, since staff must wait for tables to clear as there is simply not enough for everyone. Thankfully, the restaurant does have a bar in which you can be seated and have some drinks while you wait and suspect it would be easier to get your table on a quieter day such as Monday.

Eventually, we were seated. The table was clean and the seats were a comfortable leather, but be warned while seating is good, specific seating areas have a weirdly shaped headrest and lumbar support that could hurt the backs or necks of taller people. The lighting was dim which created a warm feeling ambience which was slightly ruined by the sunlight shining through the windows, but that’s just me being picky!

Now, the main event, the food! There was a broad range of menu items to choose from as well as steak cuts and sizes and a variety of other meats. The restaurant offered traditional 3 course meals including a starter, main and desert as well as the opportunity to purchase nibbles and drinks. The restaurant also offered experience bundles such as the masters of steak experience containing a steak, side and desert. Popular items on the menu include the 8OZ Rump, Millers Dirty Burger and sirloin 8OZ. The staff were very kind and friendly and we were excited to order. The restaurant offered plenty of starters which all sounded mouth wateringly tasty such as the nachos, salt and pepper calamari, sticky chipotle chicken and BBQ beef croquets. The starters ranged from £5.95 for nachos and rising to £12.50 for the box-based camembert cheese.

Being a steakhouse, we decided to skip starters and get straight to the main attraction. Disappointingly, the restaurant was not able to serve me my ideal choice of the afternoon which was the Millers Dirty Burger. It was so popular, they had run out of the ingredients for it. Instead, I opted for the 8OZ sirloin steak with the British beef dripping sauce, salad and chips. While my dad decided to see if the contrasting buttermilk chicken with dauphinoise potato, tenderstem broccoli and chicken dipping gravy was as good as the steak counterpart.

The buttermilk chicken cost £16.95 and my 8OZ sirloin steak (which I asked to be cooked "well done") costed £23.95, a steep increase over the chicken however, I suspect the chips and salad have something to do with that. The menu was fantastic however one problem is the lack of vegan/vegetarian options available which is a shame as the salads look delicious but there isn’t much variety between them. Also, I can partly understand the reasoning for this as Miller and Carter is a “steakhouse” restaurant and their primary selling point are their excellent cuts of steak, but it would’ve been nice to have a few more options available to those who don’t eat meat or animal based products.
We had ordered some soft drinks and waited patiently for our food to arrive. Annoyingly, our food was taking a ridiculously long time to arrive, and our patience was beginning to wear out. minutes passed that felt like hours since we ordered but all we could think about was that mouth-watering steak and yet we were left looking at an empty table. A point of recommendation is, if possible, go on a day and at a time that the restaurant is not busy as missing ingredients, table waiting and slow service are issues that come when this restaurant is busy. Having said that when our food arrived it was extremely well presented and once again the staff was friendly and understanding as they delivered our meals.

Excitedly, I poured the gorgeous beef dripping onto my steak and took my first cut of the knife straight into the meat. The meat itself was slightly overcooked and I could tell by the toughness of the knife as I cut into it. But once I had torn a piece away, I took my first bite and instantly got a burst of flavours. The meat was juicy, creamy and the texture was smooth and not gritty, the slight toughness persisted but when the steak tasted so delicious it was not something that bothered me. However, what did bother me was the portion size, it could’ve been bigger. For what it was I was still craving more even after I was finished and for the price, it seemed expensive.

On the other hand, my fatherly co-taster told me his buttermilk chicken was “soft and appetizing” I also noticed the chicken was a slightly bigger portion size seeming more worth it for the money. As well as the steak I also had the salad and chips both were crispy and delectable. The chips were baked to a golden-brown perfection and well-seasoned plus the salad had a very tasty dressing to it.

Finally, I decided to check out the deserts shortly after our plates were taken away. I went for the Belgian chocolate brownie with ice cream before engaging in another session of waiting patiently although by this point the restaurant was much quieter and I received it rather quickly. At a cost of £6.95 I felt the brownie could be cheaper it was another small portion size, but it was well presented and on my first bite the chewy, sticky texture was a sudden delight. The added extra of the ice cream made the brownie creamier as well as the hint of strawberry flavor with the decorative and edible strawberry topping. 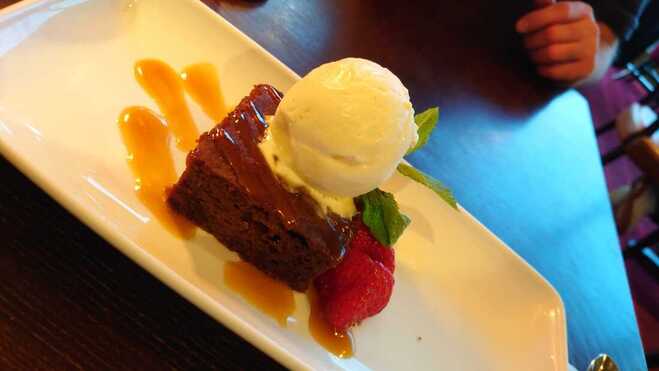 In total we spent about £68.39 on the final bill of the afternoon (including drinks) which in my opinion I found steep considering the portion sizes. Since the events of the pandemic the restaurant would like customers to pay with card or contactless only, so if you wanted to pay with cash, well you’re out of luck. Bill paid, we left the restaurant and as the evening concluded I considered, what did I really think of Miller and Carter steakhouse?

Well, I loved the presentation of the food and the atmosphere, both really added to that refined feel. The food was delicious despite my steak being slightly tough and the staff were truly wonderful in their assistance. What I didn’t like was the painfully slow service thanks to the chaos at peak hours, neither did I like the size of the portion sizes considering how expensive it was. Of course, there were smaller issues such as payment, seats and the dress code but frankly none of that really mattered when the sole purpose of the restaurant, delivering outstanding food, was fulfilled and one that matched my expectations because of how divine those flavours truly were.