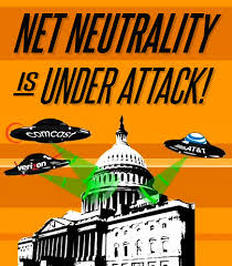 You may have heard the term ‘net neutrality’ mentioned in the media. Net neutrality is one of  the fundamental principles of the Internet we know today. Essentially, it means that the companies and organisations providing the infrastructure that is the backbone of the world wide web must treat all traffic passing through their networks equally. I believe that net neutrality is very much worth fighting for, because without it the Internet would not be the breeding ground of creativity and originality it is today. For this reason, I along with many other Internet users believe net neutrality to be worth defending. Read on for a more in-depth look at why.

This may sound like a petty issue in comparison to the other issues today’s world faces, such as climate change, and the refugee crisis and to a certain extent it is. However, it is my belief (alongside others) that the Internet will be a key tool in combating these issues, allowing people to connect and create like never before. I firmly believe that equal access to the Internet for all is a net positive for the human race, and net neutrality is required for this to occur.

The principle of net neutrality says that that governments and ISPs (internet service providers) should treat all internet traffic equally, regardless of any circumstance, such as who the user is or the application being used. The term was coined in 2003 by an American media law professor. It allows for an Internet that allows for and protects free speech, by preventing ISPs from controlling what you can view online. People would be outraged if phone companies began to attempt to police what people said on their phone networks, yet don’t realise the issue of net neutrality is very similar, the difference being the platform of communication.

May 2014 was when the chairman of the FCC, the Federal Communications Commission, which is responsible for the regulation of the Internet in America, published a plan which would have vaporised net neutrality. Thanks to (Internet-based) campaigns supported by websites like Reddit, and organisations such as the EFF, millions of people spoke out against this, and the original proposal was dropped. Instead, on February 26th, 2015, the FCC approved a new set of rules that would protect net neutrality. This was a victory for activists that had been fighting for a decade. It voted to reclassify the Internet under what is known in America as Title II of the Communications Act. This is a strong legal footing for the open Internet, but it’s not indomitable. However, winning one battle does not mean you’ve won the war. Now that these rules are in place, ISPs are doing everything they can to undermine them. They have friends in the American Congress, whom we have termed Team Cable, and are trying to call in favours with them to change the ruling. Furthermore, there are ten lawsuits now open in the US which aim to topple the ruling, or remove the FCC’s ability to enforce it. We must continue to fight to protect the open Internet.

To help you understand why I believe net neutrality to be worth defending I will build a vision of a world in which the concept of net neutrality has been forgotten. Without net neutrality, internet service providers could create expensive fast lanes. They could block people from expressing political opinions they disagree with. The destruction of net neutrality would not only affect individuals, but also companies. For example, ISPs would be allowed to ask streaming services to pay them to ensure that their service was fast for the users. This would prevent the creation and growth of new Internet-based companies to a large extent, as they would not be able to pay the ISPs to ensure their content can be accessed by the users. The Internet creates a level playing field, which ensures that technology giants and new startups are for the most part treated equally.

Convinced that net neutrality should be defended? Read on.

Unfortunately, due to the global nature of the Internet, it can sometimes be difficult for all of the people a decision about the Internet affects to take action. This is because much of the Internet is hosted on servers based in America - therefore decisions made within America about net neutrality affect a large portion of the Internet. Naturally, it is difficult for people outside of the US to voice their opinion on these. However, there is still action you can take. One of the easiest ways is to sign this petition: http://act.freepress.net/sign/internet_nn_congress_defend/ to tell the US Congress to defend the victory we won for net neutrality.

Remember, without net neutrality, we may not have  had many of the household names we all know today. Perhaps Mark Zuckerberg wouldn’t have been able to afford to pay ISPs to ensure that traffic to his new site, Facebook, wasn’t buried by existing competitors. As much as I hate to admit it, a world without Facebook would be a very different one. Perhaps Netflix would be forced to close if ISPs were allowed to charge them for the high traffic its users create. So take action now and keep the Internet free and open.