No Room For Racism- UEFA Qualifiers 2020

​ During England’s international win against Bulgaria, the game had to be stopped twice. For a water break? Bad pitch conditions? Too hot, possibly? No. Because of racist slurs aimed at the English players, more notably at Manchester City’s Raheem Sterling, who after the game commented to ‘Feel sorry for Bulgaria to be represented by such idiots.’ 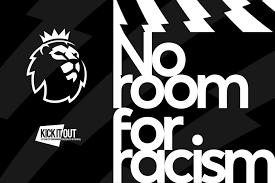 ​The group of Bulgaria fans in question were clad in black and sung carelessly whilst doing the ‘Heil Hitler’ salute- stewards made their way to the scene as quickly as possible and removed the racists from the ground. Meanwhile, on the pitch, England captain Harry Kane informed the referee of the behaviour and insisted the game be stopped; during which he consoled his teammates.

​Unfortunately, it wasn’t over for the players and the racism persisted, this time from a different group of Bulgarians. Though they were yet again removed, tempers were rising both on the pitch and in the stand packed with the
The Premier League's anti-racism campaign.  English fans. Gareth Southgate, England manager, stated that ‘If the game had to be stopped again, the players may’ve just walked off. The behaviour was completely inappropriate and unacceptable.’ On the other hand, Bulgarian manager, Krasimir Balakov, denies the presence of any racism, claiming that he ‘didn’t hear anything’.
In the end, England came back to the racism by thrashing Bulgaria with an impressive 6-0 score line (Sterling scoring twice), along with the supporting chants of determined England fans. To raise awareness of this issue, the English Premier League (EPL) created a short video with the tag line ‘No Room For Racism’, where football players of all ethnicities and races are shown saying this meaningful tagline. The clip was shown before all Premier League games the following weekend, reminding fans of what is acceptable and what simply isn’t.

For me, having attended the first Tottenham game after England vs Bulgaria, the video did leave a lasting message with both the home and away fans. However, despite how much I do appreciate the Premier League’s efforts, modern society shouldn’t need to be reminded not to discriminate. ​