Palace Skateboards: Why you need to get on this brand right now
Archie Day 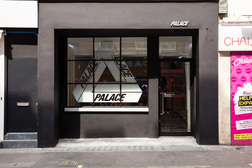 It’s 2016: youth culture is under attack now more than ever. The government, our parents and anyone with an opinion seems to be taking pot shots at what sets the youth apart from every other age group. From the increasing drama surrounding the British education system to the police down yet another grime rave, it appears to be that we aren't particularly being held in high regard right now. So, how do we cement ourselves as individuals and rebel against the expectations of our grumpy old parents without ending up getting an ASBO or being slandered in the Daily Mail? Why our clothes of course!

Palace Skateboards is a London based skate brand started in 2009 by Lev Tanju, a member of the skate crew Palace Wayward Boys Choir. Now prominent in streetwear culture, Palace blurs the lines between edgy, gritty, grimy English skate culture and the flashy, flamboyant and wonderful world of street fashion. Their logo, known as the Tri-ferg, has become a staple in the community, being popularised by celebrities such as A$AP Rocky. All profits from the brand go to paying the Palace skate team, meaning that this wonderful soon to be staple in your wardrobe isn’t for profit, it’s for the rebirth of a culture as a whole.

“So why should get involved?” you may be asking. Well, truth be told, there’s going to come a point where we, the youth, will eventually grow up and stop being young. There’s also going to come a point when Palace becomes accessible to everyone, which will ultimately be the demise of the beloved label. Irrespective, if there is ever a time to jump on the hype train for an exciting ride, it’s right now. By the time you’ve read this, Palace would have dropped their Spring/Summer 2016 collection and believe me, it’s absolutely fantastic. So do yourselves a favour; bin your Hollister garms, save up your pennies, educate yourselves and start wearing Palace. It will change your perspective on life.