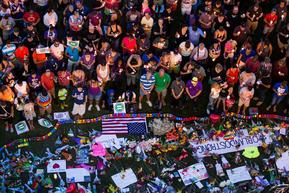 This June saw the gunning down of 49 innocent LGBT people in an Orlando gay club and closer to home the murder of Jo Cox. As is so typical of high profile murders it has been easy for the media to dismiss these tragic events as horrific but unavoidable in their randomness. To depoliticise the message of terror these attacks tried to bring is to devalue the significance of the motives. The above mentioned atrocities were vastly different in scope and in motive with Orlando being a clear hate crime and Jo Cox's death seemingly being fuelled by far right views. Despite this they are both underpinned by the use of weapons and force to promote an ideology.

In Orlando a homophobe took 49 lives, the most bloody shooting in recent US history. The attacker was only able to do so much damage because of America’s appalling gun laws. In addition his hatred of LGBT people is undeniably legitimised by the climate of disdain towards the gay and trans communities in America. From the introduction of bathroom bills to prevent transgender people from using public toilets to the fact that in Orlando itself a gay person can still be fired or evicted just for their sexuality. For politicians who have previously campaigned to deny these LGBT people their human rights to now stand up and pledge their pseudo support is a crass political move at best and at worst an insult to the victims. It is vital that these shootings are seen as inherently political as only by tackling the politics behind them: gun laws and LGBT issues, can we prevent further tragedies of this type.

The killing of Jo Cox, labour MP for Batley and Spen, showed clearly that our political climate has shifted to one of intense hatred and violence towards those simply doing their jobs. Again to dismiss this as one loner who is in some way not part of our ‘civilised’ society is ignoring the real political issues that underpin the attack. Jo Cox’s murder was overtly political at its roots with the target being an MP and the perpetrator making his political leanings clear in court when he stated his name as "death to traitors freedom to Britain". Although it's important that we don't ignore the real victims in this killing, Cox and her family, it's essential that we understand that she was a representative of the entire political establishment and the victim could've been any MP who had similar beliefs to her. In this way the murder was just as much about politics and an attack on freedom of belief and on our democracy as it was about Cox as an individual.

The notion that we shouldn't politicise deaths as it is in some way disrespectful to the memory of that person is ludicrous and it must be recognised that in politically and ideologically motivated crimes such as these, silence is not the answer. To ignore the premise of these acts is to condemn ourselves to further politically motivated crime which ultimately is more disrespectful to the victims than active conversation ever could be.