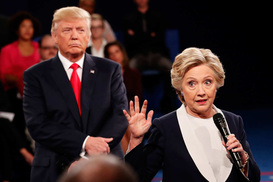 Monday 26th of September saw the first of three Presidential debates take place between Hillary Clinton and Donald Trump. In the aftermath of the debate, most polls showed that viewers overwhelmingly considered Clinton the winner - with a Fox News poll finding that 61 percent of viewers saw Clinton as having won the night, while only 21 percent could say the same about Trump. Given his behaviour during the debate, these dismal numbers would hardly shock any rational viewer. True to form, Trump routinely interrupted Clinton throughout the course of the debate, and spoke over her a record 51 times during the night. Despite his apparent desperation to have his say, Trump rarely said anything pertaining to his own policies; instead commenting on Clinton’s perceived lack of stamina and temperamental behaviour. This, coming from a man with little to no political experience, seems dishonest at best and utterly delusional at worst.

So what is it that allows a man with the lack of experience or relevant qualifications of Donald Trump to scream such baseless accusations down the mic at Hillary Clinton? Despite her many flaws and mistakes, she is arguably his political and diplomatic superior. What allows Trump to say whatever he likes (be it racist, misogynistic or homophobic, with no real evidence or reasoning behind it) and have it regarded as equal to Clinton’s policies, which regardless of one’s personal beliefs, are far more grounded in fact and experience than Trump’s? The obvious reasoning would be that she is a woman and thus has to work much harder than Trump to appear competent and prove herself in her field. It’s likely that Clinton would be crucified for daring to speak and behave in the way that Trump has, both in the campaign as a whole and in the debate. Regardless of what one may think about Hillary Clinton, it is clear that she deserves a more formidable, informed and respectful opponent than Donald Trump.

It’s certainly not a stretch to imagine that many of Trump’s remarks towards Clinton were thinly veiled attempts to undermine her due to her sex. Given Trump’s history of misogynistic comments towards women, for example Alicia Machado who was brought up by Clinton during the debate, this view would seem relatively sound. He frequently questioned Clinton’s stamina, stating that she ‘didn’t have the look’ to be President, but refused to offer any real justification for this accusation. This has been a common theme in Trump’s criticisms of Clinton and has often been heralded as blatantly sexist.

Perhaps the fact that these sorts of sexist comments and double standards are playing out on one of the most prominent stages in the world, reveals an ingrained tendency to judge women more harshly than men. After all, Trump is never criticised for not smiling enough! However, the fact that Trump’s comments lead to such widespread outrage and disdain, as suggested by the polls following the debate, bodes well for a more progressive future to the debates between the two presidential candidates.