Are pumpkin spice lattes deserving of the hype?
Merla, Joanna and Faye 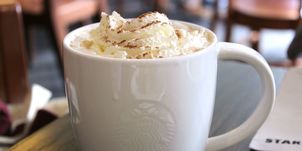 The Pumpkin Spice Latte: one of the most iconic and anticipated Starbucks drinks on the market.  We went out and bought some to sample, to see if they are really worth the hype.

At first we were really excited to get a hold of this drink that everyone has been going on about, but since tasting we’re honestly not sure if it was deserving of all of that excitement. Yes, at the beginning when the barista asked us if we wanted whipped cream we were really excited. And then when we tasted it, it was as if we’re drinking liquid Christmas! However, when drinking it there was no other taste than cinnamon which soon grew a little disappointing. There was nothing “pumpkin spiced” about it. Also, the fact that it tasted so much like Christmas put us in a really good mood, until we realised that it was nowhere near Christmas yet.

We feel like this drink is way to Christmassy to be out in September; however there are some good things about this drink. The cinnamon goes with the coffee really well and the fact that it comes with whipped cream – which you don’t have to pay for! – comes as a bonus. We would rate this drink as a 7/10 because it tastes so good but there is nothing to do with pumpkin spice as the name suggests.

We managed to find a recipe to make your own pumpkin spice latte which we have put below, so feel free to make your own. Overall, the pumpkin spice latte is a drink that yes may be delicious, but it should probably be released nearer to Christmas with their other Christmas specials as it tastes too much like a drink that should be consumed on a cold winter’s day, instead of a sunny, humid September one.