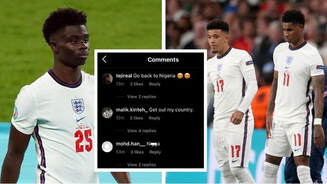 There was likely not a single person who didn’t tune in for the Euros final, England versus Italy, on Sunday night. With the whole country, so united in their excitement, also united in their sadness when England came so close to truly bringing football home, just to have it snatched away from them during anxiety ridden, gut-wrenching penalties.

The England team this year truly gave their all, taking us closer to victory than we have been in decades. But our teams’ courageous efforts were overshadowed by racist ‘fans’.

The three men who missed their penalties were people of colour. Jadon Sancho is a mixed-race man, his parents from Trinidad and Tobago, Marcus Rashford a black man of Kittitian descent and Bukayo Saka, whose parents are Nigerian. Rashfords shot hit the post, while Sancho and Saka’s shots were saved by Italys world-renowned goalkeeper Donnarumma, a completely unfortunate and unlucky situation.

The colour of these men’s skin had no affect on their penalty taking abilities, so why have supposed ‘England fans’ used this to fuel racism and racist violence?

On Sunday night, Sancho, Rashford and Saka’s social media was bombarded with racial slurs and derogatory terms. Many of the people taking part in this racism have been banned from social media sights as well as from specific football clubs, and police investigations have been launched. But it will be incredibly difficult to locate everyone who made these comments and even more difficult to punish them.

Not only have the players received disgusting abuse through social media, but Marcus Rashford has been attacked through the vandalising of his mural in his home town- Manchester. The mural was commissioned to recognise the efforts Rashford has made to tackle child food poverty, working with a charity Fareshare and earning him an MBE for continuing these efforts during covid-19. This makes him not only an extremely talented football player, representing his country, but one that’s trying to make that same country a better place. The mural was defaced with racist remarks and slurs, not only aimed at Rashford, but also Sancho and Saka.

What is possibly most shocking is the racism black people have faced because of the penalty misses, not only have Rashford, Saka and Sancho had to face such vile racist abuse, but so have the general public. Many racially charged stabbings have been reported, as well as rumours of a black man being pushed onto train tracks, and a black man being pushed in the river Thames.

The government have also done little to support the equality needed. The players have all been kneeling at the beginning of each game as a protest of racial discrimination and abuse in football. But Priti Patel, the home secretary, refused to criticise fans who booed the act of taking the knee, saying ‘that’s a choice for them’, and further said that she did not support ‘that type of gesture politics’.

Similarly to Patel, Boris Johnson was also very negative about the players taking the knee. He called it simply political and refused to condemn fans who booed the statement, with his official spokesman saying he was ‘more focused on action than on gestures’, belittling the protest. Unfortunately, this is unsurprising as Boris Johnson has a reputation for making racist comments. He has previously stated that the problem with Africa is that ‘we are not in charge anymore’, compared Muslim women who wear burqas to letterboxes or robbers and described Islamophobia as ‘a natural reaction’.
The racism in our country is clearly so ingrained in society, that members of our government, who are trusted to make decisions in everyone’s best interests, argue against the peaceful protests that aim to prevent discrimination.
After the abuse Saka, Rashford and Sancho received online, both Boris Johnson and Priti Patel made statements condemning the racism. But Tyrone Mings a black player in the England squad, called Patel out on twitter. Mings said ‘You don’t get to stoke the fire at the beginning of the tournament by labelling our anti-racism message as ‘gesture politics’ and then pretend to be disgusted when the very thing we’re campaigning against happens’. The England squad also refused to attend a reception at Downing Street to celebrate their performance in the Euros, making their opinion clear.

Luckily the majority of England have rallied around the players. Ed Wellard, a local artist, repainted the mural and kind messages were posted on it by the people of Manchester. A peaceful protest also took place there in support of the players. There has also been lots of love shown on social media, with people posting tributes to the players and speaking out against the awful abuse they are receiving.

Hopefully if any good can come out of this terrible situation, it will be people beginning to recognise that racism is still prevalent in society, and there is still so much more that needs to be done to bring about equality.

Rashford, Saka and Sancho were brave, they took a penalty for their country knowing how important this was to them, their team and their fans. They should not have to face racist abuse because a ball did not go in a goal.