The issue of rape culture in our society
Seemal Naqvi 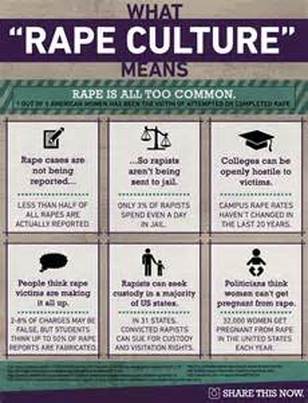 As one of the most pressing issues faced in society today, particularly given our current political and social climate, it is surprising how rarely the presence of rape culture- in countries all around the globe- is discussed. At times it is even blatantly denied, or written off as nothing more than idle complaining. This is often due to a lack of understanding of the topic. In fact, the very definition of rape culture is commonly misinterpreted as a society that ignores or disregards rape. While this sort of a society would certainly be steeped in rape culture, the term’s true definition refers to a civilisation where trivialising, normalising or, even inadvertently, condoning rape, is ingrained in attitudes towards sexuality and gender. Rape culture can refer to anything from making crude jokes about rape to officials actually disregarding valid claims and personal recounts, despite there being enough evidence to warrant an investigation. Any and all of these actions are reprehensible, yet they are extremely common in most social situations that we encounter in our lives. Even on the world stage, these actions are perpetrated by prominent individuals and then written off as ‘locker room talk’, rather than the glorification of sexual violence that they truly are.

So, what effect does rape culture have on us today? Or better yet, how do we even know it’s being perpetuated? The answer is all around us. We know because far too often if a women is raped the first question asked is ‘what was she wearing?’ or ‘had she been drinking?’ Even the victim’s own families are not above asking such trivialising questions. Having such questions asked in the wake of a personal tragedy is hurtful enough without these actions being defended as ‘valid’. Not only are the effects of rape culture damaging to the women who have experienced sexual assault or violence, but they are damaging to women in general. Young girls being told to dress or behave a certain way, not for themselves or their own preferences but because of the way others may perceive them, is an increasing problem. Mere children are being sexualised to the point that they are partly held accountable for the deplorable actions of others.

There is ample evidence to support the fact that rape culture is a very real and important issue. There are countless prominent cases of it in the media. For example, the common theme of scathing comments about female celebrities’ consensual nude photo shoots but wide spread laughter at the expense of women whose private pictures or videos are leaked on the internet. As if it’s okay but only when a woman is not okay with it. Rape also tends to be horribly mishandled far too often, by law enforcement, the judicial system and the media. For example, a recent study in Turkey showed that many victims were discouraged from reporting rape due to the attitudes of the police; 33% of Turkish police officers that contributed agreed that “some women deserve rape” and 66% agreed that “the physical appearances and behaviours of women tempt men to rape”.

Another extremely worrying area where reported rape is being mishandled is in universities, such as in the UK and America. An assurance of safety while at school (whether that’s secondary school or university) should be a deeply ingrained part of education. A parent should never have to worry over their child’s safety, nor should a young person feel perpetually threatened and unsafe in an environment that should be nurturing their growth and development. Unfortunately, a shocking amount of sexual harassment, assault and rape cases are reported each year at universities around the world.

While the majority of sexual harassment, assault and rape are perpetrated by men towards women and girls, there is no shortage of equally tragic and unspeakable cases of sexual violence towards men as well. Often many people don’t even believe that men can be raped or they believe that if they are, it is unimportant and ‘doesn’t count’. This in itself is rape culture. The erasure and trivialising of horrible experiences that some men and boys suffer through is inherently wrong, yet it is very common in our society.

All in all, the existence of rape culture is undeniably one of the most pressing issues in our society today. An issue that affects everyone, regardless of gender, race or nationality. One that must immediately be addressed, by those with the authority to take immediate action- such as people involved in education or law enforcement- as well as individuals who can do as little as take a stand against an offensive “joke”.