The Young Person’s Guide to the EU Referendum
Rebecca Hills

Click here for the live EU debate video and report 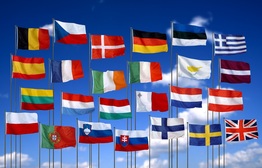 What’s a referendum?
Let’s start with the basics. A referendum is a vote by a country’s citizens on a single political question which has been referred to them for a direct decision. Put simply, it’s the government’s way of making sure a controversial political decision is made by the people instead of just by MPs. For those of you interested in history, referenda date back to the Roman Empire and are the modern equivalent to the direct democracy model used in Ancient Greece. In the UK there have only ever been eleven referenda, most of which have concerned either the EU or devolution.

What’s the EU and why is it different to Europe?
Again, another question with a relatively straightforward answer. The European Union is a select group of European countries who work together to provide economic stability and peace in Europe.

The EU was formed in 1958 and was then called the European Economic Community (or EEC for short) and consisted of six countries – Belgium, France, West Germany, Italy, Luxembourg and the Netherlands. In 1973 Britain and Ireland joined the EEC and in 1992 the Maastricht Treaty renamed the grouping the European Union.

It was formed as a response to World War Two on the basis that countries which trade with each other are less likely to want to go to war with each other.

Within the EU there is the ‘Single Market’ which, in short, is a group of 19 EU countries who share the same currency – the Euro.

Why are we having a referendum on our EU membership?
Since the UK joined the EU in 1973 there have been many people (known as Eurosceptics) who are against Britain being a member. In 1975 the UK held a referendum on its membership and, as you will already know, the result was in favour of remaining. However, this referendum did not mute the disgruntled Eurosceptics and they continue to voice their opposition as members of a wide variety of political parties.

A large proportion of the Conservative Party and a smaller percentage of the Labour Party consider themselves Eurosceptics; although neither party is defined by their views on Europe, the desire for an EU referendum from many political heavyweights could not be ignored forever.

What on earth is Brexit?
Brexit is a combination of the words ‘Britain’ and ‘exit’ and is the term used to refer to the UK leaving the EU.

Why is Nigel Farage all over the TV again?
UKIP is a party defined by their aim to leave the EU, so fortunately or unfortunately Nigel Farage will be commonplace on the TV until the referendum is over.

Can I vote?
Only people over the age of 18 on the 23rd June 2016 who have registered to vote (click here if you haven’t already) can vote.

There was a campaign conducted by the pressure group ‘Votes at 16’ to try and secure the vote for 16 year olds but unfortunately the House of Lords voted it down.

The reforms are largely constitutional but some should be of some interest to young people:

Can we still take part in Eurovision?

Fortunately our role in the most exciting and entertaining competition in the British calendar will be unaffected by the referendum decision. The only impact it could have is making us even less likely to win because the people of Europe will dislike us even more!