Refugees: Should we Care?
​ 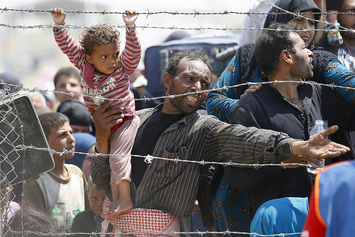 Refugee. A single word, yet so many people shy away from the issue at hand - one that isn’t about to disappear overnight. Now that at least 4 million people have escaped Syria (since 2011), the utter turbulence of the issue can no longer be swept under the carpet. How do we deal with the largest scale movement of people since the Second World War?

Unfortunately, it took the drowning of a Syrian boy on a Turkish beach for a sudden change in the response to the so-called ‘Migrant Crisis’. It’s mind-blowing how quickly the universal attitude towards migrants can change, especially when the victim happens to be a helpless, innocent child.

“I like the football and I like the freedom of speech, it’s nice,” says 15-year old Awate, currently living in Kent, who became a refugee after fleeing Eritrea following the imprisonment of his parents. Such a poignant statement from such a young mind, surely these people are just victims, and their actions are natural responses to the torment that’s been inflicted on then?

Are huge statistics and repeated footage numbing us to the crisis? Are we becoming accustomed to seeing chaos, destruction, and trauma? How can we be expected to sympathise - let alone empathise - with the problems if there’s just one after another?  As soon as there is the possibility of ‘mass migration lead[ing] to the undercutting of wages’ or stealing their jobs, Brits will get all hot under the collar. The idea that these people are not only desperate, but are seeking a better life is just too difficult to comprehend.

Generally, Britain’s views have been highly contradictory. Do we help them or don’t we? Amongst the genuine sympathy the public has for them, the hesitancy to help is spurred on by the simple fact that no one wants to jeopardise their own security or wellbeing. This, however, does not change the fact that British people believe in migrants retaining their dignity, which can be helped by distributing the bare necessities they require. This has been the aim of a local Facebook group in Stortford, who collected masses of clothes, tents and toiletries for the Calais migrants. In the grand scheme of things, it’s the anonymous people who’ve been doing the hard work, which has not been replicated by East Herts District Council who have yet to respond to local petitions calling for the area to look into taking refugees. Further still, the British
Government has now withdrawn our last rescue ships from the Mediterranean just as  Save the Children counted 159 people, including 35 children, who drowned crossing the Aegean Sea last month alone.

So, do we care? Of course we do; every Briton has the capacity to care for their neighbour. But does that mean we take every refugee affected by the crisis? Or do we solve the problem at its source? Do solely help the refugees, or should the government give support to economic migrants too? Members of the public don’t want Britain to be bursting at the seams with migrants either, only wishing we take on our fair share. The bottom line is: would you actively help a migrant who'd moved in to your neighbourhood?  They are people after all. Let's not forget that.

Want to learn more about the political situation regarding the crisis? Then click here to head over to our politics desk for their special feature on the topic.