Was it the Romans who actually invented Christmas?
Ella Barnes investigates the Roman festival Saturnalia and its links to what we know as ‘Christmas’ today 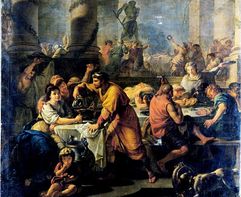 Christmas, the day on which Christians celebrate the birth of Jesus Christ, exchange presents and feast and drink with family and friends, is in fact connected to the Roman festival known as Saturnalia. So, what is Saturnalia and how is it connected to what we know as Christmas today?

A public holiday celebrated around December in the family home, Saturnalia allowed a time for feasting, goodwill, generosity to the poor, the exchange of gifts and the decoration of trees. This wasn’t Christmas, but doesn’t it sound familiar? Saturnalia, the pagan Roman winter solstice festival which originated as a farmer’s festival to mark the end of the autumn planting season in honour of Saturn, originally ranged from around the 17th- 23rd December. Saturn was the Roman god of agriculture and the harvest, and actions such as over-eating, gambling, drinking, singing and sharing witty tales were all part of the celebrations to honour and show their appreciation towards their God for the successful harvest.

Christmas apparently started – like Saturnalia – in Rome, and spread to the east Mediterranean. The earliest known reference to it commemorating the birth of Christ on December 25th is reportedly in the Roman calendar of 354 AD. So how did the Romans progress from celebrating Saturnalia as a festival for a God to celebrating it as Christmas and for the birth of Christ? Well, it is evident that once the Roman Empire Constantine became Christian in 312 AD, they realized the best way to introduce the concept of Christmas was to do it at a time people were already used to celebrating. In fact, when parts of Rome began converting to Christianity under the Emperor of the time, it is believed that some of the pagan rituals, such as Saturnalia, were carried over as compromises to make the transition less challenging.  However, in order to fit their new religious beliefs the festivals would be renamed to celebrate key dates in the Christian calendar.

So, how else does Saturnalia compare to what we know as Christmas today? Wax tapers and torches were lit – in a similar way to our advent candles, whilst houses would be decorated with wreaths of plants and candles to appear inviting and spread warmth.  Furthermore, there is even a theory that Father Christmas’ cry of ‘ho ho ho’ may have even originated from the Saturnalia custom of declaring ‘lo’ when having a good time.

It is evident that whilst we may not label the celebrations as ‘Saturnalia’ any longer, the links are undeniable. So, this Christmas, whilst you’re munching on mince pies, how about you give a little thought to our common heritage and appreciate your new found knowledge? Perhaps, you could even give a cry of ‘lo’ when celebrating with your family in memory of Saturnalia and how it has developed to the holiday we celebrate today!