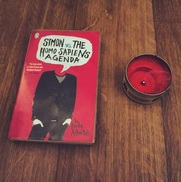 Simon vs The Homo Sapiens Agenda by Becky Albertalli is (unsurprisingly) a story about Simon, a teenage boy who gradually begins to fall in love with another anonymous kid, ‘Blue’, who he has been communicating with through email. Which seems sweet enough. Only, not only is he not ‘out’ to anyone other than this boy, he’s being blackmailed by another classmate, which brings on many challenges for Simon.

This book, despite some of the more serious topics it covers, is quite a fun and enjoyable book to read. Simon, in many ways, is a very likable and quite adorable protagonist. What’s more, Albertalli has narrated the book so well that you would think she was, in fact, a gay teenage boy. Anyone who is able to write a book which mimics my thought processes so accurately deserves a medal, or possibly a counselling appointment. Within the first chapter, I found myself nodding in agreement (and partial bemusement) with Simon’s remark about being lectured on coming out by a straight boy. SO ACCURATE.

I was only reluctant to pick up this book because I thought it would be miserable and scare-mongering; these are generally the tropes I am familiar with, particularly in young adult books. However, despite getting into some pretty heavy themes at times, Albertalli ensures the mood is kept light and happy. The breaking up of the story with the emails between Simon and Blue means that you are never more than a few pages away from a light hearted conversation about Oreos (and other things, but clearly, Oreos should be a priority). This reprieve is most welcome, especially as the plot develops and things become more difficult for Simon. Albertalli is also very aware of the stereotypes she uses; although Simon is into musical theatre, which is often seen as a stereotypically ‘gay’ hobby, she also ensures he has plenty of depth, meaning that this aspect is never questioned as being anything other than authentic.

I also adored the fact that, although I thought I was being clever by assuming how the plotline would go, the ending caught me completely off-guard. Then again, I think that was the point Albertalli was trying to make.
​
This is a genuinely lovely, relatively quick read.  I am a little worried that, although I enjoyed the book, it is a little non-descript and I’m scared it might blur in my memory as just another high school coming out story. I really hope that doesn’t happen, though. This book deserves to be remembered, not only because it is a great read, but because it serves as great example of how to write widely-appealing LGBT+ coming out stories without catastrophizing the entire process.