Get Ready for Spectre!
Hope Goldsmith 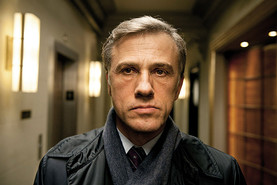 ﻿﻿﻿﻿﻿﻿﻿﻿﻿﻿﻿﻿﻿﻿﻿﻿﻿﻿﻿﻿﻿﻿﻿﻿﻿Spectre welcomes Christoph Waltz who plays Franz Oberhauser, the main villain of the movie. His motives towards Bond are unclear. In the trailer, he is seen as the senior figure of the SPECTRE organisation; an acronym of Special Executive for Counter-intelligence, Terrorism, Revenge and Extortion. Dave Bautista, known for his role as Drax in Guardians and the Galaxy, will also be joining the cast as Mr. Hinx, an assassin and high-ranking member of SPECTRE. In the trailer, he is seen doing many physical scenes fighting Bond, which suggests that he shares Oberhauser’s opinions towards Bond. Another new male actor joining the Bond family is Andrew Scott, known as Moriarty in Sherlock, who plays Max Denbigh, a member of the British government.

Have you seen Spectre? Click here to send us your thoughts, comments and reviews. The best posts will be published on the culture desk after half term!