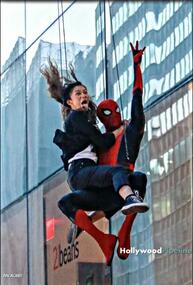 As most of us know, just over a year ago our town was lucky enough to be chosen for the filming of not only the next Marvel film after the infinity saga, but also Tom Holland’s second solo film within the MCU – Spider-Man: Far from Home. This film could definitely be considered light, breezy, and an easy watch - especially after the emotional impact Avengers: Endgame left.

After Avengers: Endgame, fans were left heart-broken, and unsure about what Marvel had planned next for the MCU. The uncertainty stemmed from the fact that one of the most beloved superheroes paid the price to defeat Thanos, leaving the Avengers, especially Peter Parker, clueless as to what the next steps were.

Of course, after the blip, our friendly neighbourhood Spider-man thought he deserved a well-earned break with his friends on a school science trip to Europe. He just wanted to leave his suit behind and enjoy life like a ‘normal’ 16-year-old would, and, to add to Peter’s quirky, soft personality, he wants to have his first kiss with the girl he likes.

As any Marvel fan would know, nothing is ever that simple. Nick Fury had other plans and needs Peter’s help alongside Mysterio, otherwise known as Quentin Beck, to defeat the elementals: fire, water and air. Despite this, Marvel stuck to their common theme of keeping it light and breezy when it comes to Spider-man saving his friends and loved ones.

However, the one question remains in the audience’s minds – is Peter Parker going to be the next Iron Man? Throughout the film we watch Peter struggle with this question, watching him make mistakes along with multiple scenes that make fans emotional from the amazing use of emotional contagion.*

Due to Endgame’s high quality, if you went in to watch this film expecting a lot of intensity, major battle scenes and emotional struggles this film would probably disappoint. Nevertheless, it’s still a loveable film with its amazing optical illusions, special effects and scenes that just make us fall in love with Peter Parker all over again. Marvel, understanding that fans needed a pause from heartbreak, outdid themselves.

But wait till the end credit scene…