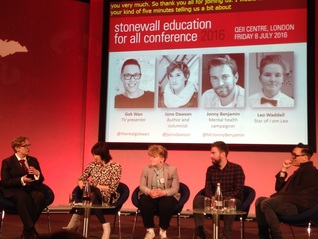 On the 8th July, the school's Equalities Group, which was set up to support and act as a safe space for LGBT+ students and allies within Herts and Essex, attended the annual Stonewall education conference aptly named ‘Education for All’. The conference's main aims were to educate and inspire the young people and teachers in attendance on ways they can further LGBT equality in their schools and the surrounding area.

The students that went had the chance to attend talks and workshops on things like mental health, bisexuality, youth campaigning and transgender identities, as well as a number of other topics. The talks were all very informative and featured renowned LGBT faces such as Juno Dawson, a children’s writer and trans woman; Maria Munir a non-binary student who famously came out to Obama earlier this year; and Asif Quraishi perhaps better known as Asifa Lahore, a famous Muslim drag queen who spoke about the struggle of combining identity with religion. These talks were very educational and gave us a lot of food for thought as to how we can incorporate this passion back at school.

The day culminated in Hertfordshire winning an award for being the best local authority in the country on LGBT equality, much of which is due to the tireless work of young people and their teachers inside and outside of school. A panel-style Q&A session wrapped up the day which was attended by the likes of Gok Wan, Jonny Benjamin, Leo Waddell and of course Stonewall’s beloved Chief Executive Ruth Hunt. The entire conference had been of great benefit to all of those involved and only further inspired us to carry on the great work we have been doing.

The Equalities group have done so much in our short time together and we have made a real change to the way LGBT issues are addressed in school. This year, we celebrated LGBT history month and organised numerous charity events to raise money for Gendered Intelligence. Our future aims include campaigning for gender neutral toilets within school and welcoming new members. We will also be continuing to keep LGBT issues an important topic within school, making it a more comfortable and safer place for students of any identity to be.