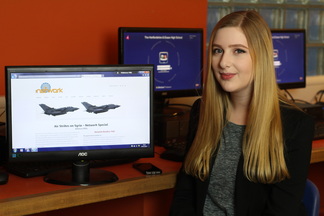 In a poll in their online newspaper, students at the Herts and Essex High School in Bishop's Stortford, voted resoundingly against air strikes in Syria.

The poll was included in a comprehensive feature written by Rebecca Hills, senior political editor of the school's student newspaper Network, outlining the arguments for and against the government's motion.

The feature received nearly 400 hits on Wednesday (December 2) with a resounding 75% of students voting against the air strikes proposed by the government.

Year 13 Politics student Rebecca said: "I thought it important to offer an impartial viewpoint on the debate to contrast with many of the ideological stances publicised in the main newspapers."

"I wanted to allow students to be able to develop their own views based on the facts rather than political bias."
Tom Mann, the school's subject leader for Politics, kept a separate tally of his students' responses with 79% of his students also voting against the motion.

After MPs voted on that evening, Rebecca reflected on the difference between the results.
"I'm unsurprised by the commons vote in favour of air strikes but it's interesting to see just how different our polling results are in comparison," she said.

"It also highlights that the views of politicians are seemingly unrepresentative of young people in our area."
Parliament voted 397 to 223 in favour of air strikes following a 10 hour debate in the House of Commons.