The Case of Dee Dee Blanchard 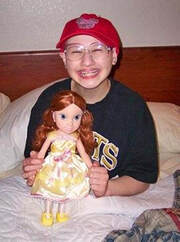 According to her mother, suffered from Leukaemia, Asthma, Muscular dystrophy, along with several other chronic conditions and had the "mental capacity of a 7-year-old due to brain damage" she had suffered as a result of her premature birth and said she required a wheelchair and feeding tube. The list of medical problems that Dee Dee related about her daughter would go on to include seizures, asthma and hearing and visual impairments.

In a 2017 interview, Gyspy spoke to Dr Phil saying that she'd had 30 different procedures, including multiple eye, leg and throat surgeries. Her salivary glands were also removed."You have been cut open. You had parts taken out of you. You got hacked up. You got poisoned," Dr Phil said. "Your childhood was stolen from you. Your adolescence was stolen from you."
"I believe firmly that, no matter what, murder is not okay. But at the same time, I don't believe I deserve as many years as I got," she said at the time.

​Experts believe DeeDee had a mental illness known as Munchausen syndrome by proxy (also called factitious disorder imposed on another), which made her fabricate her daughter's ill health in order to receive attention and sympathy for taking care of a sick child.

By the time Gypsy was three months old, her mother was convinced the infant suffered from sleep apnea and began taking her to the hospital where repeated overnight stays with a sleep monitor and other tests found no sign of the condition.
​When Gypsy was 7 or 8, Bobby (her uncle) recalls, she was riding on her grandfather's motorcycle when he had a minor accident. She suffered an abrasion to her knee, which her mother said was the visible sign of injuries that would require several surgeries to treat properly. From then on, Gypsy was confined to a wheelchair, although he saw signs that she was indeed healthy enough to walk on her own on several occasions.
Clauddine moved in with her father and stepmother. They would later claim that Clauddine, when preparing food for her stepmother, poisoned it with weed killer, leading to her own chronic illness during this period.

Rod Blanchard (father) also continued to make monthly child support ​payments of $1,200, as well as sending Gypsy gifts and occasionally talking to her on the phone (during one call, on her 18th birthday, he recalls Dee Dee telling him not to mention her daughter's real age since "she thinks she's 14"). She often wore wigs or hats to cover her baldness; her mother regularly shaved Gypsy's head to mimic the hairless appearance of a chemotherapy patient. When they left the house, Dee Dee often took an oxygen tank and feeding tube with them; Gypsy was fed the children's liquid nutrition supplement PediaSure well into her 20s.

Sometime around 2012, Gypsy, who continued to use the Internet after her mother had gone to bed to avoid her tightened supervision, made contact online with Nicholas Godejohn, a man around her age from Big Bend, Wisconsin (she claimed they met on a Christian singles group.
However, she apparently did not find him as desirable in person as he had seemed online; she later said he was "creepy". The two continued their Internet interactions, however, and began developing their plan to kill Dee Dee.​


The Murder
Godejohn (her boyfriend) returned to Springfield in June 2015, arriving while Gypsy and her mother were away at a doctor's appointment. After they had returned home and Dee Dee had gone to sleep, he went to the Blanchard house. Gypsy allowed him in and allegedly gave him duct tape, gloves and a knife with the understanding that he would use it to murder Dee Dee. Gypsy claimed later that she did not expect him to be able to do it.
Gypsy hid in the bathroom and covered her ears so that she would not have to hear her mother's death. Godejohn then stabbed Dee Dee several times in her sleep. The two had sex in Gypsy's room, took $4,000 in cash that Dee Dee had been keeping in the house, mostly from her ex-husband's child support checks, and fled to a motel outside Springfield.

On the afternoon of June 14, at Gypsy's urging, Godejohn used his phone to post two updates to Dee Dee's Facebook page, so that people would discover the body. The first read simply "That B*tch is dead!", followed 17 minutes later by a longer comment suggesting that whoever left it had violently killed Dee Dee.

​
The Aftermath
​The Blanchards' friends responded to the first post and its language, uncharacteristic for Dee Dee, by asking if she was reacting to a movie she was watching, or speculating that her account had been hacked. After the second post, they knew something was not right. When phone calls went unanswered, several of them went to the house.
When the police arrived at the house, they had to wait for a search warrant to be issued before they could enter, but they allowed one of the neighbours present to climb through a window, where he saw that the inside of the house was largely undisturbed, and that all of Gypsy's wheelchairs were still present. Police then entered the house and soon found Dee Dee's body. A 'GoFundMe' account was set up to pay for her funeral expenses, and possibly Gypsy's.

The news that Gypsy was safe was greeted with relief back in Springfield, where she and Godejohn were soon extradited and held on $1 million bond. The media in Springfield soon reported the truth of the Blanchards' lives: that Gypsy had never been sick, had always been able to walk, and that her mother had made her pretend otherwise, using physical abuse to control her. Greene County Sheriff Jim Arnott urged people not to donate any money to the family until investigators learned the extent of the fraud.

After the disclosure of how Dee Dee had treated Gypsy all those years, sympathy for her as the victim of a violent murder rapidly shifted to her daughter as a long term victim of child abuse. County prosecutor Dan Patterson soon announced he would not seek first-degree murder for either Gypsy or Godejohn, calling the case "extraordinary and unusual". After her attorney obtained her medical records from Louisiana, he secured a plea bargain to second-degree murder for Gypsy.
In July 2015, she accepted the plea bargain agreement and was sentenced to 10 years in prison.

In February 2019, Godejohn was sentenced to life in prison for the murder conviction, the only possible option since prosecutors had declined to give him the death penalty. Godejohn asked Judge David Jones for leniency on the armed criminal action charge, which carries a minimum sentence of only three years, saying he had fallen "blindly in love" with Gypsy. He received a sentence of 25 years on that charge, to run alongside with the life sentence.


So do you think that Gypsy was right to do what she did?