Rosalind Franklin was an English X-ray crystallographer and chemist. As well as helping discover DNA, she made contributions to the understanding of the molecular structures of RNA, viruses, coal and graphite. Her work on coal and viruses was appreciated during her lifetime however, her role in the discovery of the structure of DNA was only recognized after her death from ovarian cancer in 1958.

Franklin studied Natural Sciences at Newnham College, Cambridge, from which she graduated in 1941. Having earned a research fellowship, she joined the University of Cambridge physical chemistry laboratory under Ronald George Wreyford. In 1942 she started her work on coal at the British Coal Utilisation Research Association. This work helped her to earn a Ph.D in 1945. Franklin then travelled to Paris in 1947 where she became a post-doctoral researcher at the Laboratoire Central Des Services Chimiques de I'Etat. During her time there Franklin became an accomplished X-ray crystallographer. She remained in Paris until 1951 when she became a research associate at King's College London where she worked on X-ray diffraction, which would eventually lead to the double helix theory of DNA. Two years later, due to a disagreement with her Director John Randall and her colleague Maurice Wilkins she moved to Birkbeck College.

In February 1953 at the Cavendish Laboratory in Cambridge University, Francis Crick and James Watson started to build a molecular model of the B form of DNA using data similar to what was available to both teams at King's. Franklin's critical research was completed by this time, ahead of her move to Birkbeck. Linus Pauling had successfully applied model building to the determination of the structure of the Alpha helix in 1951. However, Franklin was opposed to prematurely building theoretical models until a sufficient amount of data was obtained to guide the model building. She believed that building a model was only to be undertaken after enough of the structure was known.

In the middle of February 1953, Crick's thesis adviser Max Perutz, gave Crick a copy of a report written for a Medical Research Council Biophysics committee visit to King's College in December 1952. This report contained many of Franklin's crystallographic calculations.

Since Rosalind had decided to move to Birkbeck College and Randal insisted that all DNA work must stay at King's, Wilkins was given copies of her diffraction photographs by Raymond Gosling, a Ph.D student assigned to help her.

Watson and Crick finished building their model on March 7 1953, a day before they received a letter from Wilkins stating that Franklin was finally leaving and they could put "all hands to the pump". This was also a day after Franklin's 2 A-DNA papers had reach Acta Crystallographica. The following week Wilkins came to see the model and allegedly told Gosling on his return to King's.

It's unknown how long it took Gosling to tell Franklin at Birkbeck, but her original B-DNA manuscript does not reflect any knowledge of the Cambridge model. Rosalind did modify this draft later before publishing it as the third in the trio of 25 April 1953 Nature articles.

Watson and Crick then published their model in Nature on 25 April 1953 in an article describing the double-helical structure of DNA with only a footnote acknowledging "having been stimulated by a general knowledge of" Franklin and Wilkins' "unpublished" contribution. Although it was the bare minimum, they had just enough specific knowledge of Franklin and Gosling's data upon which they could base their model. As a result of a deal struck by the two laboratory directors, articles by Wilkins and Franklin, which included their X-ray diffraction data, were modified and then published in the same issue of Nature, seemingly only in support of Crick and Watson's theoretical paper which proposed a model for the B form of DNA.

Weeks later, on 10 April, Franklin wrote to Crick for permission to see their model. She retained her scepticism for premature model building even after seeing the Watson-Crick model and remained unimpressed.

Rosalind Franklin's first important contributions to the model popularised by Watson and Crick was at her lecture at a seminar in November 1951, where she presented to those present, among them Watson, the two forms of the molecule, type A and type B. She said that the phosphate groups are located in the external part of the molecule. She also specified the amount of water to be found in the molecule in accordance with other parts of it. This data has considerable importance in terms of the stability of the molecule. Franklin was the first to discover and formulate these facts, which made up the basis of all later attempts to build a model of the molecule.

Her other contribution included an X-ray photograph of B-DNA called photo 51 (Image below). This image was briefly shown to Watson by Wilkins in January 1953. 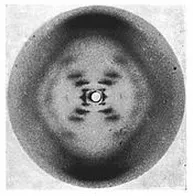 When Watson and Crick started to build their model in February 1953 they were working with critical parameters that had been determined by Franklin in 1951, which she then refined with Gosling in 1952.

Upon the completion of their model, Watson and Crick had invited Wilkins to be a co-author of their paper describing the structure of DNA. This offer was turned down by Wilkins as he had no part in building of the model. Later, he expressed regret that more discussion of co-authorship had not taken place as it may have helped to clarify the contribution the work done at King's had made to the discovery. There is no doubt that Franklin's experimental data was used by Watson and Crick to build their model of DNA in 1953.

Now, there are many buildings and awards named in her memory, many acknowledging Franklin’s contribution to the discovery of the structure of DNA.

Although her name is more well-known than many other female scientists, many people have still never heard of her or her contribution to the discovery of the structure of DNA.

Rosalind Franklin isn’t the only female scientist whose contribution to the world of science have been forgotten by almost everyone. There are so many other female scientists that we don’t know anything about. For example, many people don’t know that a woman identified a genetic marker for many types of inherited cancers, wrote the first computer program, discovered that XY chromosomes are responsible for sex of a baby and developed principles that are used in Wi-Fi.