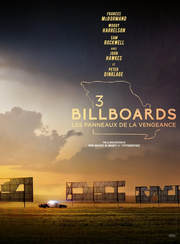 Plenty of people have predicted Three Billboards outside Ebbing Missouri will collect many awards at the 90th Academy Awards next month, and quite frankly they have made fairly accurate predictions.  The official nominations don’t reveal Three Billboards outside Ebbing Missouri to be leading the way, but 7 nominations is nothing to snub about.  Set in Ebbing, southern America, this film revolves around the life of a grieving mother (Frances McDormand), who is on a quest for justice after the gruesome death of her daughter (Kathryn Newton). Sometime previous to when the film is set, Mildred Hayes’s teenage daughter was raped and murdered yet no arrests were made.  Perhaps on a whim, she decides to rent 3 unused billboards located on a seemingly abandoned road that only two certain types of people use. The billboards are her way of reviving the case for her daughter, which she believes has ultimately been forgotten by the Ebbing Police Department.

Mildred is a middle-aged, toughened woman who owns a seldom visited gift shop, which she works in with her colleague and friend, Denise (Amanda Warren). She has separated from her husband and lives with her son Robbie (Lucas Hedges), with whom she has a difficult and fluctuating relationship with. At one point in the film, whilst driving past the 3 billboards in question, Robbie launches into a rant about how he knew the individual details of his sister’s death and they were gruesome enough on their own separately. However, now that they have been pieced together due to the billboards, he knows the full story and this has released a fresh load of pain. Mildred attempts to comfort him but he meets it with fierce rejection. Nevertheless, at another point in the film, whilst they are both sitting down to eat breakfast, Mildred catapults a spoonful of cereal at Robbie’s face and he unsuccessfully stifles a giggle; this occurs after no obvious reconciliation.

The billboards provide a much awaited sense of catharsis for Mildred, and she most definitely garners the attention she intended from local TV, the town authorities including Head of the Police Department, the respectable and revered Chief Bill Willoughby (Woody Harrelson) and the wider community of Ebbing. Chief Willoughby breezily avoids provocation, due to malignant matters of his own. The billboards did, however, rub his incompetent, blatantly racist momma’s boy of a deputy (Sam Rockwell) the wrong way. As soon as it is evident that the billboards have this effect on him, the narrative almost shifts away from Mildred and her quest for justice to this racist white policeman and his journey to redemption. He achieves this not through addressing and denouncing his ignorance, but by putting it aside in order to give one last gallant attempt to find the  perpetrator of the malicious crime. This ultimately jars the female driven storyline, and causes McDormand’s eloquent performances to serve as mere support for his epic journey. That’s great though, because all we need is yet another white saviour.