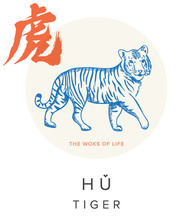 ​
The origin of The Year of the Tiger
The Tiger zodiac is a replacement of the olden days Lion zodiac, it was changed by the Jade Emperor (who was in charge of making the Chinese Zodiac) because he thought the animal was too ferocious, he then thought of the Tiger guardian which was in front of the Jade Palace. The Tiger protected both the palace and Earth over its life span and the emperor put the Chinese character 王 on the Tigers forehead which translates to king of animals which has stuck to this day where it is still regarded as the king.
Celebrities born on the year of the Tiger: What will this year bring? The personality of a Tiger: