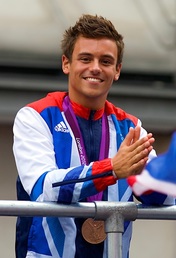 Famous swimmer, Tom Daley, has had many successes in his career, winning a bronze medal in the 2012 Olympics, being awarded Young Sports Personality of the Year in 2009, winning two gold medals in the World Championships and many more sporting achievements. However, as well as being well known through his sporting career, Tom Daley is also well known for coming out, back in 2013.

Daley first impacted upon the LGBT+ community in late 2013 when he came out of the closet via a YouTube video.  In the video Daley shared that he was in a relationship with a man, later revealed to be screenwriter, Dustin Lance Black.

Luckily, for Daley his sexuality hasn’t affected his sporting career. He believes that sexuality shouldn’t create barriers, stating "You're judged on what you do in the pool, not outside the pool and it should be the same if its football, if it's rugby, you should be judged on what happens on the field, nothing else.”