What a Trump presidency means for minorities
Charlie Markham 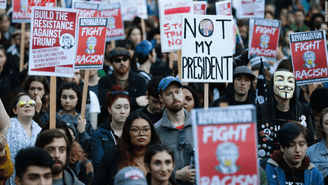 Bigotry prevailed last month as infamous misogynistic, racist, homophobe Donald Trump was elected as the 45th US president. Throughout his campaign Donald alienated many minority voters with his right-wing stance and blatant intolerance and has promised to target these minorities with effective legislation that will ‘make America great again’. Whether Trump is capable of putting his words into action is debatable but for a campaign of hatred to be so successful sends one clear message to the minorities of America: you are not welcome here. Much like the Brexit campaign this election has shown minorities just how unwanted they are in some parts of the country. In the aftermath of Brexit hate crimes rose 41% because of the validation of discrimination the outcome brought. Extreme candidates such as Trump legitimise hatred and bigotry and endanger all minorities.

Trump’s racism is incredibly well documented and hardly needs more coverage; his claims that Mexicans are rapists and drug addicts are nothing compared to his plans to build a wall and introduce mass deportation. As a candidate endorsed by the KKK, ethnic and religious minorities in America were perhaps one of the most heavily targeted groups for attack in Trump’s campaign. Not only is the language he used against them abhorrent but his plans to bring back undeniably discriminatory practices such as stop and search in major cities shows just how out of touch Trump is with the POC experience. Stop and search led to obscene levels of racial profiling due to police disproportionately targeting black youths and achieved little more than to further criminalise ethnic minorities. For Trump to reintroduce this practice would be divisive.

In addition to this, his attack on religious minorities, mainly Muslims, also did much to stoke the xenophobic rhetoric that has become more commonplace across the West. Trump has many times conflated American Muslims with ISIS, an absurd and misleading claim, and vowed to ban Muslims from entering the US. This kind of action, although incredibly unlikely to actually be put into place, only furthered religious intolerance and marginalization of one of America’s most victimised groups.

Although not a minority, Trump's attitude towards women also needs no introduction. His misogynistic approach and his labelling of women as pigs, dogs and slobs alienated many women and put forward a harmful image to young girls. If your president does not respect you why should anyone else? We all heard Trump’s vile remarks about his non-consensual groping of women, this coupled with the long list of sexual assault claims made against him and the misogynistic remarks he made towards Hillary Clinton means he is no ally to women. As well as this, he has outlined plans to defund Planned Parenthood (the primary provider of reproductive health services in the US) and criminalise abortion. Again showing he is out of touch with the needs of women.

Another group Trump has attacked is the LGBT+ population who had made great strides towards equality under Obama’s administration. Trump himself has flip flopped on LGBT issues including the controversial bathroom bills introduced in North Carolina and whether he supports marriage equality. Although Trump has been dismissive of LGBT equality during his campaign his Vice President Pence has spent his political career actively trying to marginalise the gay community. Not only has Mike Pence campaigned for ‘religious freedom’ bills in his home state which condone the discrimination of LGBT people in employment, housing, health care and wider society, based on religious beliefs but he has also been an advocate of conversion therapy. This harmful practice is outlawed in states like California, and believes gay and trans individuals can be ‘cured’ of their sexuality or gender identity.

Trump has also promised to appoint anti-LGBT Supreme Court justices, a decision that has the potential to affect any future civil rights cases. At some points in his campaign Trump has also promised to reverse the Equal Marriage Act which has given gay couples the right to marriage. He has also promised to limit adoption by gay couples. Although this act is unlikely to happen given its widespread public condemnation, the sentiment is still there and to even think about rolling back such basic rights as these creates a dangerous atmosphere of intolerance towards LGBT+ Americans.

​For Obama, the first black president, a president who introduced health care for the poor, marriage equality and who became an outspoken feminist, to have to hand the reigns of leadership to someone like Trump is not only an embarrassment for the American people but flies in the face of progress and development. Regardless of background, all Americans deserve to feel represented by their government and shouldn’t have to fear the next four years. Unfortunately this no longer seems a reality for minorities and women across America who must now live under a government that does not respect them as people.