Why being a vegetarian sucks 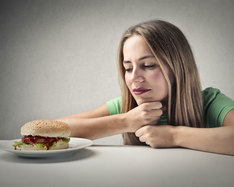 It was just after I had watched a video - not advisable for those who are squeamish - that revealed some of the most horrific acts of torture I had ever seen, which brought me to tears.

Everyone in my family is invariably a meat-eater, so they were confused when I stated I would never eat meat again. I was surprisingly angered by this confusion as I didn’t understand how they could agree with an industry that is so deeply embedded with suffering. Is it because it’s animals suffering that we care less? Or have we, as humans, become immune to suffering all together?

To put it in to perspective, my eating self is 17 years a meat-eater and one month a Vegetarian. I’m not a hippie, I’m not overtly religious, but I know that I could never kill an animal myself so I would be fooling myself I was to continue eating them. Maybe it’s because there was a slab of meat on the plate that allowed me to repress any feelings of guilt I had for that animal’s murder. There is nothing natural about the way that animal was killed. The way is see it: being a Vegetarian isn’t so different from the feminist movement or the LGBTQ+ pride marches, in the sense that the person is active in asserting their beliefs rather than quietly complying. This is probably why our society is so irritated by them.

The 5 worst things you can say to a Vegetarian (just don’t):

1. "But we’re supposed to eat meat.”
Take a look at the carnivores in the animal kingdom: they have fur, claws, and razor sharp teeth because in my opinion they are biologically designed to hunt other animals. If you took away our guns and weapons we would be practically useless at killing animals; it is the only the machinery that allows us to so. Then, there’s the processing of meat where it has to be treated then cooked just so we can stomach it. Clearly, there’s nothing vaguely natural about that.

2. “I would become a Vegetarian when animals go extinct.”
That’s like saying you would only stop smoking if you got lung cancer. Or, you would only stand up for something when everyone else accepts it. The only reason the LGBTQ+ are becoming more widely accepted in our society is because they are shouting about what they believe in. Why would you wait until something became an existential crisis until you decided to actually do something about it?

3. “Don’t you have to eat meat to be healthy?”
Undeniably, there are benefits to eating meat like the Omega 3 in fish and the proteins in meat but what people don’t realise is that every single vitamin and protein can be found as a Vegetarian alterative. On average, vegetarians are less likely to suffer from obesity, heart disease, high blood pressure, and some forms of cancer. Statistically, they actually live longer than meat-eaters- particularly in Western countries. So really the question we should be asking ourselves is: “Does being a meat-eater make you unhealthy?”

4. “But don’t you just love the taste of meat?”
Of course, I do, but I have priorities. Yes, that means I won’t be able to have turkey roast at Christmas or a McDonald’s beef burger, but I don’t mind. Did you know the average meat-eater consumes around 7,000 animals in their life time? Knowing that those animals died just for me to say “that tasted good”, to me, is just not worth it.