In the vastness of the Void...
Arona Jones 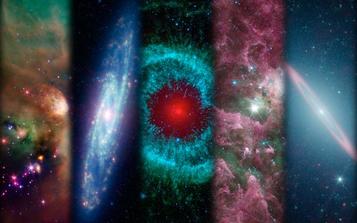 Space is huge. Unimaginably so. And it’s almost all empty space (in terms of 'standard' matter). Regardless of this, it’s full of a diversity of weird and wonderful objects. Our own solar system is full of variety, from greenhouse Venus to stormy Neptune. But compared to the wider universe, it looks really quite boring.

Space might be pretty much empty, but it’s quite noisy. A huge amount of our understanding about the universe comes not from looking, but from listening to the void. For example, a particular type of neutron star (can be formed after the post-supernova collapse of a supermassive star) called a pulsar emits regular bursts of radio waves.  The most distant observable objects: quasi-stellar radio sources, better known as quasars, are also highly noisy. Solar flares from stars are also usually accompanied by bursts of radio waves. Even the interaction between Jupiter and its volcanically active moon, Lo, produces radio ‘storms’.

Many people will be familiar with, or at least have heard of, the term 'black hole'. However ,surprisingly few actually know what a black hole is, past something that no light can escape from. A black hole is defined as a region of spacetime that has such a strong gravitational pull that nothing, including light and other EM (electromagnetic) radiation can escape from it. The border of a black hole is known as the event horizon. Of course, due to light being unable to escape, we cannot observe a black hole, only infer its existence from the effect it has on surrounding objects. Supermassive black holes are thought to exist at the centres of most galaxies, including our own.

Even the arguably most boring object in space, the exoplanet (referring to any planet outside of our solar system), has numerous interesting variants. One example is 55 Cancri e, a planet thought to be made up of carbon in the form of diamond, with massive theoretical worth. The icy planet of Gliese 436 b is unusual in that it has a temperature of 712K, or over 400 celsius - put dramatically, it’s a gigantic burning ice cube. Or WASP-18b, a doomed planet that will eventually crash into its star due to tidal deceleration.

The variety of space is not limited to single objects. Sagittarius B2 is an interstellar cloud of gas and dust that contains about 10 billion billion billion litres of alcohol. Due to the presence of large amounts of the compound ethyl formulate, it also smells like raspberries and tastes like rum, since this compound is what causes these flavours. A cosmic reservoir of raspberry rum. If there is a Creator, they doubtless have a sense of humour.

Next time ,you look up at the darkness of the night sky, take a moment to think about what’s up there. For humanity’s comparatively brief existence, the heavens have remained (largely) constant. Time is measured not in hours nor years nor even lifetimes, but aeons, up there in the darkness. The scintillating stars of our night sky are still essentially the same as they were at the genesis of life on the tiny watery ball we call Earth. Home.