NEW! The Network's special guide to what's on at the cinema

A new feature for the Network is our guide to what's on at the cinema. This section will be regularly updated with the latest movies to help you make those big decisions about which ticket to buy for the perfect big screen experience 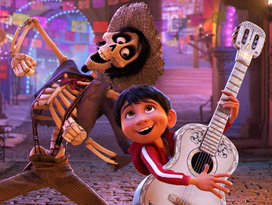 What can I say about this new film? I don’t think there are enough words to describe how utterly brilliant and magical Coco is. All I can really say is Disney have done it again. They have knocked it out the park again with this spectacular movie. When I first saw the traile,r my first thoughts were ‘oh right, new Disney film does not look as good as previous films but still, this film is Disney – I am going to see it’. My views, however, had completely changed by the time I walked out of that cinema. One of my first thoughts when the film finished were ‘firstly, when can I go and see that again? And secondly, how amazing was Coco compared to my expectations!’

The film is about a Boy named Miguel whose dream is to be musician, but there are certain barriers in the way when it comes to this dream. His family are against music of any kind: if there is a man just humming in the street they will flare up as they believe that music is practically a sin in their family. But Miguel is determined not to let his family stand in his way. When the day of a music competition arrives, Miguel decides that he will perform and prove his family wrong. However, this does not go to plan when the day of the music competition also happens to be the same day that the dead are able to visit their relatives and friends in the real world. Miguel gets caught up with the dead and landing up in the realm of the dead. The only way for him to return home is to get his dead family to give him a blessing to go home but with the condition that he never plays music again. Will Miguel return home with the knowledge that he can never play music again, stay in the land of the dead, or find another way to both get home and play his music?

One of my favourite aspects of the film was the animation for the land of the dead. I always know that Disney animation is going to be remarkable as it is Disney but I thought it was portrayed beautifully. It included lots of different aspects from the real world which I thought credited to the film stunningly. I spent the first few moments when the land of the dead was presented just admiring how remarkable it was, from the train station that transported them to the features of the characters that were part of the dead.

The film airs in the Cinema on the 19th of January 2018 and will still be in the Cinema half term week. So why don’t you treat yourself to an excellent film at half term because I can guarantee you it will certainly not be a waste. If you are a Disney fan then I know that you will enjoy the film; if you don’t consider yourself a Disney fan, don’t worry, because it is still an excellent film no matter what age you are. It was a perfect film for me because it was a nice, light-hearted film where you don’t have to think much – you can just sit back and enjoy!

The Greatest Showman: PG
Network rating: 4 out of 5
Reviewed by Charlie Instrall 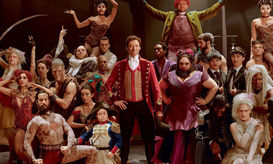 The Greatest Showman took audiences by surprise at the end of 2017, releasing approximately a month before the advertised date. This bold move to bring the release date to the 26th of December payed off, however, especially with myself. I had seen the film 4 times before we welcomed 2018.

This film is primarily a musical, and the audience can clearly see the award-winning stage-musical talent that is Jackman, rather than the brutal Wolverine that his image has been catered towards. He performs wonderfully, with a clear sense of passion and skill behind every word. I personally went into the film for the first time expecting another Les Misérables, and was sorely mistaken.

Hugh Jackman stars in this film as PT Barnum – a man trying to associate himself with higher class living in the 19th Century after being born in poverty. The family-friendly film follows him through his rags-to-riches tale, with Jackman growing into a man, married and with children within the space of a single song – “A Million Dreams”.

The rest of the film follows his attempts to make money to support his family, eventually settling on finding individuals that are called “oddities”. These individuals and Barnum become the focus of the film, exploring their successes and problems encountered whilst being part of the circus. Without startling the audience, the film shows how those who disagree with others can be physical with this disagreement. The film is very careful with its content – it is a determinedly chaste, wholesome entertainment with no sexual themes or swearing, though the older members of the audience might raise their eyebrows at the suggestion of Barnum being unfaithful to his wife (Michelle Williams) with Jenny Lind (Rebecca Ferguson).

Whilst attempting to keep this review relatively spoiler-free, I must mention that the rest of the cast, especially Zac Efron and Zendaya, play their respective roles excellently and talking about anymore would spoil the film’s “B” plotline.
However, as much as I personally enjoyed the film, it is not without faults. Some of the “Oddities” are left without a backstory, the film glosses over some of the shadier history about the real PT Barnum, whom deceived to gain fame, and the CGI is not the best in the few scenes that it is used in, looking alarmingly fake.

Apart from these details, and a little plot hole here and there, the film was an excellent entertainer. It pulled the audience into their time, creating the perfect family-friendly world for someone to escape too. It certainly helps that the soundtrack is stellar, and I recommend giving it a listen. Hundreds of hours went into writing and rehearsing this music, and they did so wonderfully. After seeing this film for the first time, my instant thought was “I’ve never come out of a film feeling so happy.”

Whilst the film is not perfect, it certainly entertained me – and is that not the reason that the film industry exists? The feeling of contentment after leaving the cinema screen is not something I’ve felt a lot of before, and therefore I have no problem placing the film high up my favourites list, alongside masterpieces such as Dunkirk and The Revenant. I highly recommend giving this film a chance.