The future is fusion. And it’s getting closer.
Arona Jones 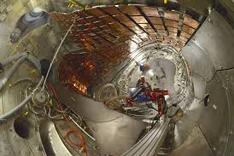 STOP PRESS: On 10th December WX-7 successfully generated it's first plasma, containing it for a tenth of a second. Such as short time is still highly significant - it proves it works! The next step is longer and longer bursts. This could be history in the making.

What is nuclear fusion?
Nuclear fusion is the process behind all life. It’s the engine that drives the stars themselves. In nuclear fusion, hydrogen is fused into helium, a process which releases a large amount of energy. Due to the efficiency of this process, development of nuclear fusion reactors has been in development for a long time. We are still quite a way from commercialisation, but the newest research reactor, dubbed WX-7, is an important step in the right direction.


Nuclear fusion requires incredibly high temperatures to occur. Hundreds of millions of degrees in fact. Temperatures at which atoms transcend the normal three states of matter to become superheated plasma. This plasma is usually created by using lasers to heat gas. Then there’s the problem of confining (and keeping warm) the incredibly hot matter. This is done traditionally through strong electromagnets and induction (creation, effectively) of a current within the plasma.

The two designs of fusion reactors
Commonly, nuclear fusion reactors are built to confine the plasma in a donut shape, a design known as a tokamak. This design requires the aforementioned induction of a current within the plasma, which can cause it to break containment and damage the reactor, meaning reactors of this design cannot be run for very long, and certainly not long enough to be energy efficient. It takes enormous energy to begin the fusion reaction, and considerably less to maintain it, so fusion reactors need to run for longer than the current few minute bursts that are possible now if there are to be energy efficient.

The other design is much more complex and holds the plasma in a ‘twisted’ donut. As a result, many more magnets are required, and it is more complex to build. However, it does not require that an electrical field be induced in the plasma. This should allow reactors of this design to run for much longer periods of time.

WX-7, and what it means
The WX-7 (short for Wendelstein 7-X) is the largest stellarator in the world at a diameter of 16 metres. It took nineteen years and £715 million (one billion euros) to complete, and contains over 400 tons of superconducting magnets! Thanks to all of this, it should be able to contain the plasma for a period of thirty minutes, smashing the current record of six minutes and thirty seconds held by the French reactor, Tore Supra of the tokamak design. This may even be long enough to have a net positive energy output, although not a significant one.

The reactor’s construction was recently completed, and is at the time of writing awaiting authorisation for activation from the German nuclear safety authority. It should be activated before the month is out. If successful, it will be a major step towards clean and cheap fusion power. If not, hopefully we can learn from it and continue to move forward, if slower. The future, however, is bright. (Pun absolutely intended!)