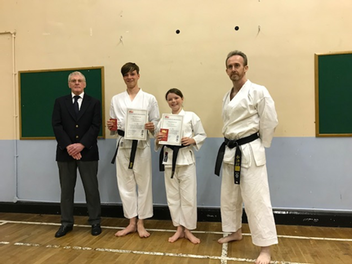 On the 3rd of October a girl named Hannah Davidson 7 Hart, passed her black belt in karate. She has been doing karate for over half of her life and she passed along with her brother and 3 others, and she was the youngest there by at least 3 years. They were examined by Sensei Sharkey (9th dan) and he said “the club have always had high standards and this year they have met their standards” about the grading overall. During the grading she and the others had to perform a kata (a long sequence of moves) to a high standard, and then fight each other with hand pads and a gum shield. They then had a to do a controlled fight where you were to show techniques using defences and attacks, and then finally the Sensei called out moves in Japanese and they then had to do the moves he was calling out.

Overall, it was a nerve-wracking experience but all her hard work paid off. She is already inspiring younger children to learn karate as she is now teaching them, and one day she hopes to progress further and gain her second Dan black belt.